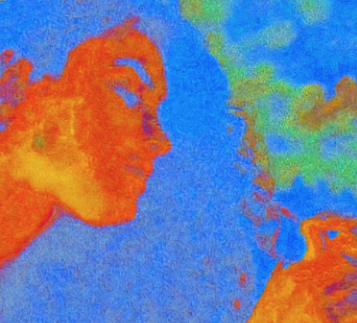 These days, it’s not difficult to find a person who is overly critical of technology within the music industry. Practically all you need to do is mention the word “synthesizer” and someone will poke their head up with a complaint. Sontag, a Los Angeles based modular-synth musician takes a different approach.

Embracing technology with sound, the young artist is keen to explore possibilities in our relationship with machines. He does so with his latest release, a two-track EP called Overwhelmed created on a eurorack modular instrument, inspired by Jimi Hendrix’s ‘1983… (A Mermaid I Should Turn To Be)’.

Curious about the man (and machine) behind the music, we sat down to learn a little more.

I really started developing an independent appreciation for music with the use of Napster. Before that my musical world was limited to my father’s records, the radio, and whatever CD I could afford to buy maybe once every other month. Napster and other P2P sharing software opened me up to an entire world of new and old music. I began downloading music and burning CDs for all my friends in school, which allowed me to experiment with the identity of a musical curator at the age of 12. Music production came later in my teenage years when I first began experimenting with recording and editing my vocals for songs I had written.

Now I exclusively produce and mix on a eurorack modular instrument. I began building this about 2 years ago with the hope of creating an instrument that I could truly compose with live. It hosts 33 separate modules at the moment and my current patch connects them with over 100 cables. My sound is highly dependent on a few modules such as Make Noise’s Morphagene, Noise Engineering’s Mimetic Digitalis, Manhattan Analog’s DTM, and Doepfer’s A-182.

Yes. I began my musical production completely with software, slowly realizing that I wanted to be more tactile with my musical creation, leading me to hardware.

You’ve recently released your two-track EP Overwhelmed. Tell us about the creative process for this album

The inspiration for my approach to Overwhelmed came specifically while listening to Jimi Hendrix’s 1983… (A Mermaid I Should Turn To Be). I fell in love with the improvised way the track was constructed. I imagined Jimi tracking hundreds of takes of different pickings, slides, noodling, feeling the music as it was called, constructing his masterpiece from the pieces. I was drawn to the idea of finding an instrument I could play as Jimi did it. Discovering the pieces while simultaneously executing on the whole, without layers of abstraction between. For this, I leaned on machines. I leaned on randomness and the ability to easily react in any moment. I designed around accessing sounds that need adjustment, while relying on those that can develop on their own.

It has been a fun and sometimes frustrating relationship. It has educated me on balance and compromise, imagination and judgement. The track ‘overwhelmed’ represents this instrument in a relatively early state where things first started to click and I began to elevate above simple loops and patterns to cohesive arrangements. ‘they_felt’ is a step further where I first began to experiment with improvised mangling of my vocals. These tracks are intended to be colorful, textured, and rich. Everything you hear was performed live by twisting knobs and pushing buttons. The audio came out in a single stream through a stereo line and I was not able to go back and edit anything save for cutting and pasting two sections together like a tape machine. I would not be able to reproduce either of these tracks due to my setup changing. They mark the beginning of this journey and represent my first real auditory contribution to the vision.

Which track is your personal favourite of the two and why?

That’s a hard question, I appreciate both of them for how they moved me forward at the time I composed them. I think I am partial to they_felt simply because it was the first time I incorporated both my own vocals and my new approach to composition. This melding was an important moment in my development.

Which three albums or artists would you say have influenced your sound in a big way?

Technology’s ability to create art – I think we are starting to see the beginnings of how newer technology can augment and support art. I feel it’s important that things like generative algorithms and semi-intelligent artistic tools get time and energy dedicated towards them so that we experience new sounds, new colors, new textures. Gain new possibilities in our relationship with machines.

The artwork associated with this EP sprouts from my fascination with machine image recognition and manipulation. The cover art was generated from a single photograph taken by my friend and photographer Joseph Calvo. This photograph was then mutated using style transfer with a deep convolutional neural network. The original photo provided the content while another image provided the style and coloring. I tracked every iteration as the machine attempted to negotiate between these two objectives, style and content. I then chose out a particularly interesting step where the image dissolved into a noisy orange and blue highlight of the woman. I love zooming in and finding new sections that look like leaves, canyons, or waves. While I consider myself a musician most importantly, this kind of experimentation with visual art stimulates me in exciting new ways. I hope to continue to grow and develop this muscle in future releases.

Famous last words for your listeners?

Don’t fear technology, take it and make it work for you. 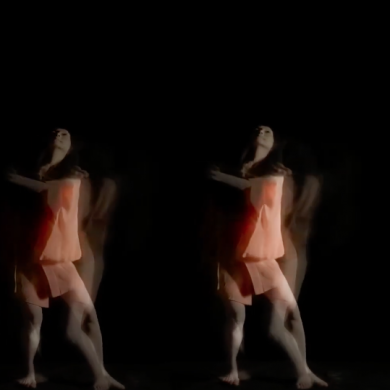