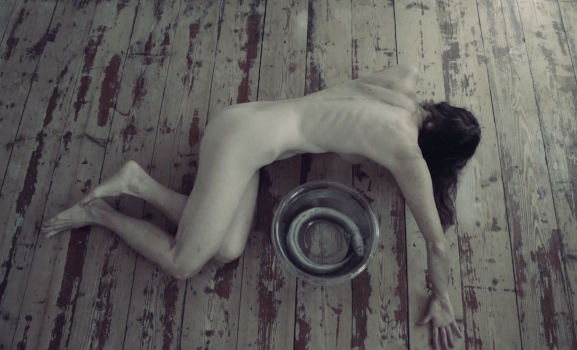 London-based, Australian-born vocalist, musician and ethereal soundscaper Penelope Trappes has announced details of her new EP ‘Eel Drip’, which is set for release digital and on 12″ solid white vinyl on October 23rd through Houndstooth.

Along with the announcement, she has shared the EP’s haunting title track and an accompanying video. The track sees fragile arpeggiated electronics and hazy vocals swell to a celestial hallow. It sets a delicate, unhurried sense of peace that flows throughout the EP’s four tracks – both sparse and gentle, yet rushing with light and emotion.

“‘Eel Drip’ Is about honouring the dead, the passing of lives within you and beyond you” Trappes explains. “It’s about physical or emotional change, acknowledging fears, and being true to yourself… reaching your full potential.”

The accompanying video was directed by Agnes Haus and inspired by artist Francesca Woodman’s 1970s series of nude self-portraits with Eels.

Of the video, Trappes comments: “In the process of changing and shedding past notions of myself, there is another world between the past and the future.  An eternal state, unknown, warped, slippery, free. Submitting to change, dying… being reborn.”

Penelope Trappes spent 2016 writing and recording what would become her first solo album, ‘Penelope One’ in a piano studio in East London. Composed of mostly percussion-less, reverb-heavy haunting atmospherics with dystopian themes, the LP was released via Optimo Music in 2017 on vinyl and as a photo book. The first single ‘Puppets’ premiered by opening the Fendi SS17 runway show.

‘Eel Drip EP’ opens the next chapter in her career and is the first element to a truly intimate body of work. Recorded at her home studio in Peckham, London, it sees her confronting personal loss and the cycles of life with startling honesty – “giving myself permission to let go” she says. “Let go of control and surrender on a deeper level.”

“My personal journey has been mirrored in that of my daughter’s – the healing – the self love, and thus the growth”she continues. “Acknowledging that life cycles through birth and death, within our bodies and minds. Finding fearlessness and peace within the darkness. freedom from self-doubt and anxiety.”